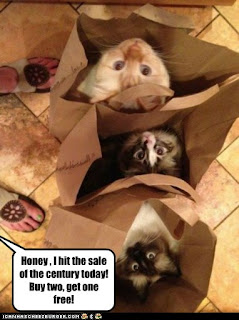 We had a garage sale last Saturday.
I discovered that I prefer attending garage sales, not giving them.
DH wanted to start setting things out at 7am, because he was convinced it would take hours and hours. In our town, garage sales start at 9am. Have to pick my battles with him, so we started setting things out at 7am. Took us less than an hour. *sigh*
Despite the early hour, people started showing up as I was still pricing things. Made almost $50 before the “official” start at nine! As anything not sold was going to Goodwill, I priced to sell. I’ll never understand people. If something is priced at $2, why would you try to bargain it down to $1? Especially cleaning supplies that go for 3x my price at the grocery store. Sheesh!
The stuff that we thought would sell, didn’t. And the last-minute additions that we threw out there instead of throwing in the garbage, did. Go figure.
Busy with my last week of work, I forgot to place an ad in the paper or post it at the grocery store. Heard that two of the neighboring towns were having town-wide garage sales, so didn’t expect much traffic. Was pleasantly surprised how many people stopped by! There was another garage sale up the street, so maybe they advertised?
People seemed to come in waves. During one wave, a man asked how much for some tools. Tools were supposed to be DH’s area, but he was nowhere to be found. I asked the man to wait a moment, then went looking for him. Not in the backyard. Not in the house. Finally found him next door, talking to the neighbor. He decides to be social for the first time in forever in the middle of our garage sale? Big chicken, trying to hide…
Friend of ours stopped by and brought her brother and his family. Was nice seeing Annie, and she cleaned me out of baskets! Her brother bought about $60 worth of stuff. Gave them the friends and family discount. 🙂
Sitting in the garage during a lull, DH saw an old adding machine on the shelf and brought it over. It was his dads and we weren’t exactly sure how it worked, but it was kind of cool looking so I didn’t want to throw it away. I cleaned it off and set it out just for fun. The very next people to show up bought it! A teenage girl who thought it looked cool.  Must have been her first garage sale because when I told her a couple of dollars as a price, she offered five. Uh, okay. Bargain me up? I’m all for it!
She wasn’t the only one who bargained up either! I put a note on the table that all vases were $1, so I wouldn’t have to price each one (I had a lot of vases). A man brought two over to me and, without asking the price, offered me $2 per vase. Um, okay. Sad to say that they were the only two, as everyone else either paid the marked price or tried to bargain down from $2 to $1. Was a little weird as no one tried to bargain for the things marked $3 or $5, but only the $2 items.
We were planning on staying open until 3pm, but the lady at the permit office messed up and put 6pm as our end time. By 2, traffic had really slowed down. The sky was starting to get dark, so we began packing up in case of rain. A few people stopped by as we were bringing things back inside, but didn’t buy anything.
All in all, it was a productive day. Made about $400 in 7 hours. And I got to experience what a gas station attendant feels like, with a big wad of cash in my pocket that I could pull out to make change. What was even cooler is that about an hour after we closed up, a lady rang the doorbell to see if the bedroom set was still available. It was, so she offered to buy it for her son. They were heavy and too nice to throw away, so very happy to see her! Score!
DH considers the sale a failure because we had a lot of stuff left over. I consider it a success because we’re $400+ richer! Now I just have to haul the rest of it to Goodwill…

akaTerri is a participant in the Amazon Services LLC Associates Program, an affiliate advertising program designed to provide a means for sites to earn advertising fees by advertising and linking to amazon.com